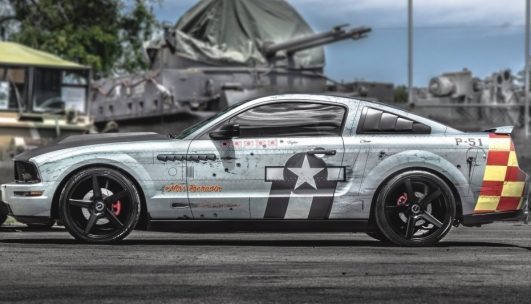 The Ford Mustang logo may be a horse, but this particular car is inspired by a very different kind of Mustang. The North American P-51 Mustang was one of the most legendary fighter planes of World War II, and Ford and tuner Roush have teamed up to build a one-off 2019 Mustang GT inspired by that plane. The car will be auctioned off, with all proceeds going to an aviation education charity.

The P-51 Mustang earned its reputation as a great fighter plane thanks to its performance and endurance. It was able to escort Allied bombers all the way from England to Germany and back, protecting air crews from German fighters and ensuring a crucial aspect of the Allied strategy could be carried out. One of the most famous Mustangs was Colonel Bud Anderson’s “Old Crow.” Anderson flew 116 combat missions during World War II, including during the D-Day invasion of France. He earned more than 25 decorations for his service.

Ford and tuner Roush have teamed up to build a one-off 2019 Mustang GT inspired by the P-51 Mustang World War II fighter plane. It features a 710-horsepower supercharged V8. The Mustang GT will be auctioned off to benefit programs run by the Experimental Aircraft Association.

A casual drive in the most powerful Mustang built to date.